C‑SPAN's original series exploring American history through the writers who have shaped the course of this nation.

C-SPAN's American Writers: A Journey Through History explores American history through the lives and works of American writers who have influenced the course of our nation. C-SPAN presents each program from a historic site associated with a writer's life and work. Every program features selected writers' novels, speeches, diaries, essays and life stories, creating a snapshot of American history. 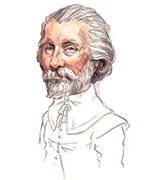 As a member of the Separatist movement within Puritanism, Bradford migrated to Holland in 1609 in search of religious freedom and lived 11 years in Leiden. In 1620 he helped organize the Mayflower's expedition to the New World.

To bind the group into a political body, Bradford helped draft the important Mayflower Compact en route to America. Once on land, he helped select the site for the new colony. In 1621, after the colony's first, disastrous winter, he was unanimously elected governor, and he served in that position for some 30 years between 1621 and 1656. His remarkable tact, honesty, and political ability proved indispensable in assuring the colony's survival, and he helped avert numerous potential disasters. He was instrumental in establishing and fostering the principles of self-government and religious freedom that characterized later American colonial government.

Though lacking in formal education, Bradford possessed native literary ability. His vivid account of the early settlement, History of Plimoth Plantation, 1620-1647, not published in full until 200 years after his death (1856), has been a unique source of information about the Puritans' voyage and the challenges that faced the settlers.

A Dialog Between Some Young Men & Sundry Ancient Men

Plimoth Plantation is the living history museum of seventeenth century Plymouth Colony. Established in 1947, the museum has grown from a single re-created house near Plymouth Rock to include three major Mayflower replicaopen-air attractions; the 1627 Pilgrim Village, Hobbamock's Wampanoag Indian Homesite, and Mayflower II, as well as other exhibits, shops, and galleries.

More From This Series

View all videos from this series